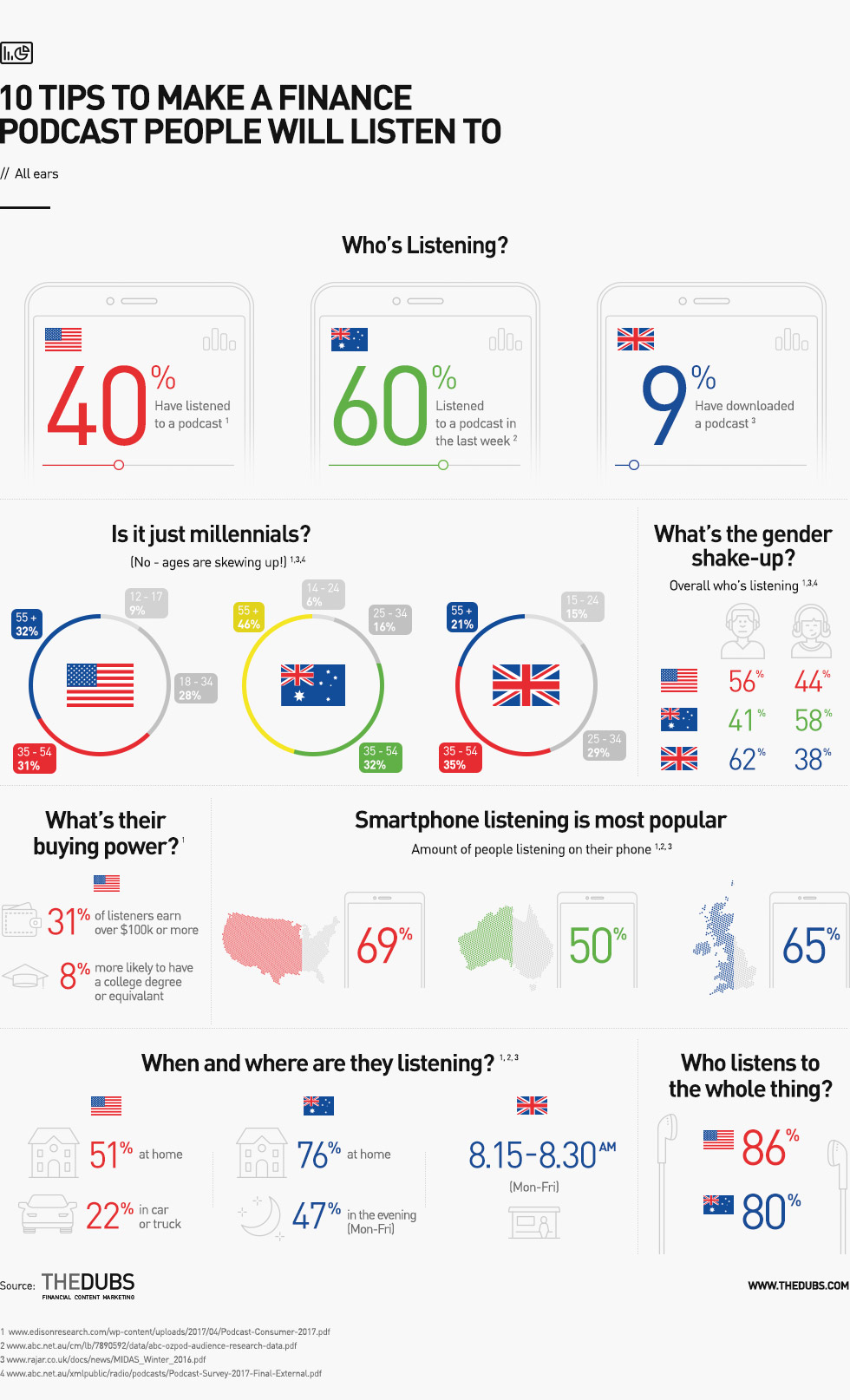 10 tips to make a finance podcast people will listen to

You may be ready to embrace audio, but is your audience? In this infographic we’ve looked at the stats to give you an idea of whether a podcast will resonate with your audience and fit your brand purpose.

Unsurprisingly, many of the most downloaded and talked-about podcasts have been created by media networks and experienced creative storytellers, for whom content is their daily bread.

The most famous example, the investigative journalism podcast Serial was the first to reach 5 million downloads in the iTunes store, and its second series, released over 2015 – 16, was downloaded 50 million times according to the show’s producers.

In the finance realm, Planet Money is probably the best-known example, a show about the global economy which is downloaded 1.4 million times each month. Its creator NPR is a producer and distributor of news and cultural programming.

Can a brand do their own Planet Money and succeed? Community bank Umpqua have made a series called Open Account, talking about “making, losing and living with money”. A former MTV News correspondent hosts it.

GE’s The Message sci-fi anthology, about decoding alien messages, has been downloaded almost 8 million times. It focuses on the story, not on GE as a brand.

eBay’s Open for Business talks about building a business from the ground up, and only has one connection to the brand per episode.

Morgan Stanley’s Ideas podcast tackles an intriguing business question per episode, “…or a persistent problem in the business world… and introduces us to people working in sometimes surprising corners of the realm of capital”. Morgan Stanley people are interviewed in some.

How do you get ears to yours?

It’s great that folks are all ears for audio, but if you produce your own, will they come? The ABC’s 2019 podcast survey shows Australian podcast listeners are very engaged. For those who listened to a podcast in the previous week, an average of six podcast episodes were listened to, with word of mouth being the number one means of discovering new podcasts.

Will yours be good enough for someone to recommend it? What’s going to connect with your audience, especially given all the other expertly-crafted content competing for their attention? (This Digiday article suggests branded podcasts doubled in numbers by end of 2017.)

Here’s what you’ll need to do:

Strategy
How podcast advertising turned 2 finance apps into household names
NEWSLETTER
Get on the list
Subscribe to receive the latest content marketing news and insights straight to your inbox.