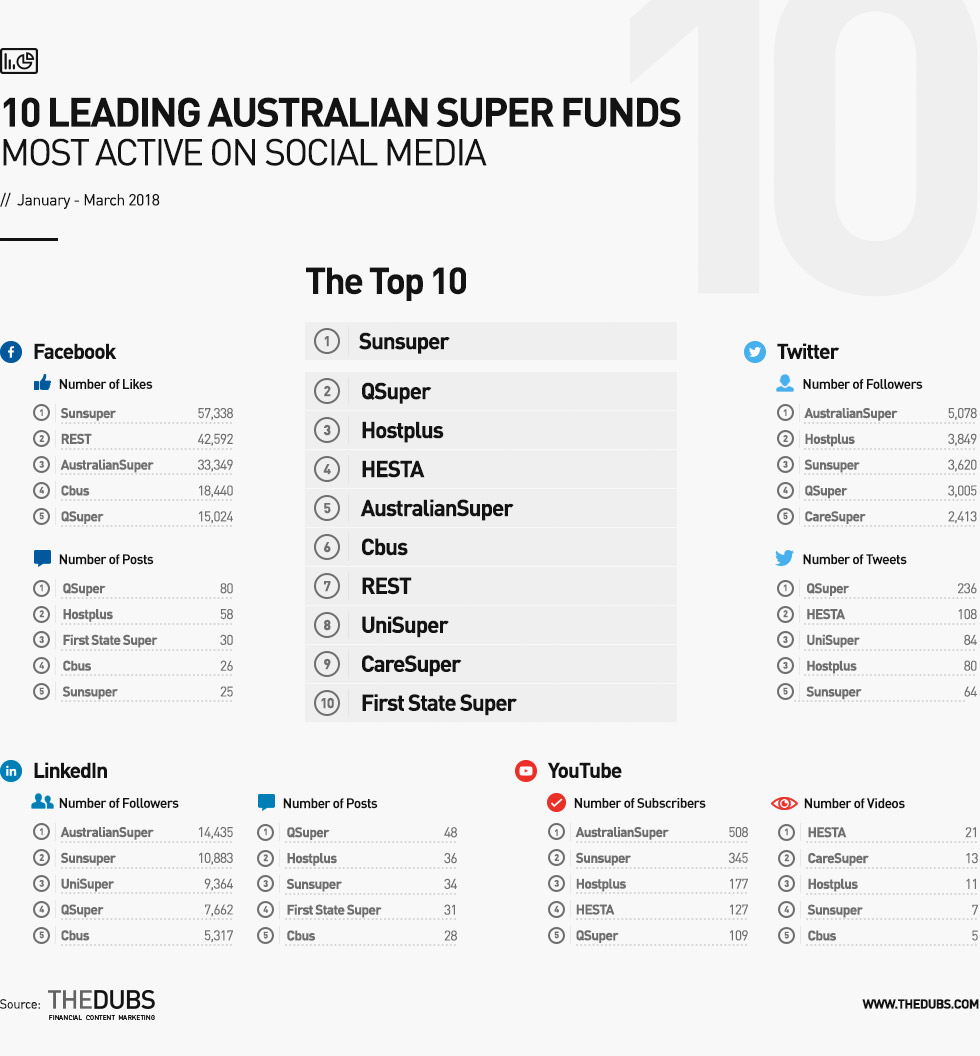 Six months ago we delved into the social media activity of Australia’s leading super funds, ranking them based on their overall presence and the level of engagement they’ve achieved with their target audience. In this report, we look at what’s changed in the past year and who has taken the lead.

A social media strategy needs to be reviewed and revisited regularly if it is to be effective in the long-term. Looking at the social media activity of the super funds compared to the previous six months, it’s clear from the significant shift in rankings that many of the funds, QSuper in particular, have made changes to their strategy that have delivered tangible results.

Despite Twitter being the channel on which Australian super funds are most active, Facebook is where they have the greatest reach, indicating that customers see Facebook as the preferred channel to engage with these organisations. Given the emphasis on lifestyle and life stage content as a marketing tool, it makes sense that customers would look to Facebook to connect with these brands. With the most active super fund currently posting less than once per day, there’s definitely an opportunity for all funds to ramp up their Facebook activity.

Given the emphasis on lifestyle and life stage content as a marketing tool, it makes sense that customers would look to Facebook to connect with these brands.

Generally, Twitter is a channel best-suited to announcements, news and brand awareness efforts, rather than being the best tool to drive website traffic. This raises the question of why the super funds are placing so much emphasis on this channel, with QSuper posting four times per day on Twitter compared to less than once per day on Facebook. Our recommendation for the super funds is to invest more energy on Facebook, LinkedIn and YouTube as opposed to prioritising Twitter.

Across the board, the super funds in this report have attracted large LinkedIn followings that they connect with on a reasonably consistent basis – on average once every two days. While lifestyle and life stage content ties in well to the objectives of super funds, so too is it relevant for these companies to speak to financial topics, which of course are well-suited to take place on LinkedIn.

Once again, our report shows that YouTube is a hugely undervalued resource, with most of the super funds having practically no reach on this channel. While some funds have put paid amplification behind their TVC content, the results show that amplifying this type of content isn’t the best way to attract a following on YouTube.