How to grow your captive audience with a follower campaign

When amplifying content over social channels the bulk of attention is often devoted to awareness and lead-gen campaigns, but there’s another campaign objective that deserves the limelight – follower campaigns.

A follower campaign actively encourages users who interact with a brand’s amplified content to become a follower on that channel. Far more important than just boosting the vanity metric of follower numbers for fluffy reporting purposes, the real value of acquiring followers is that all future organically posted content and communications will be seen by that individual. It’s a way for finance brands to continue communicating with a captive audience, well beyond the timeframe when paid advertising campaigns have stopped and ads have disappeared. Acquiring followers shifts users from a temporary paid media target audience to become part of a permanent brand-owned audience, similar to acquiring a new email newsletter subscriber.

How to run a follower campaign on LinkedIn

With LinkedIn and Twitter regarded as trusted, high-value sources of information and research for customers and clients, building a captive audience and following on these social channels holds significant value for finance brands.

On Linkedin there are two ways to run a follower campaign. The first is to create an ‘engagement’ campaign and choose ‘Follower ad’ as the creative format. This allows the creation of dynamic personalised ‘Follower ads’ like the one below. 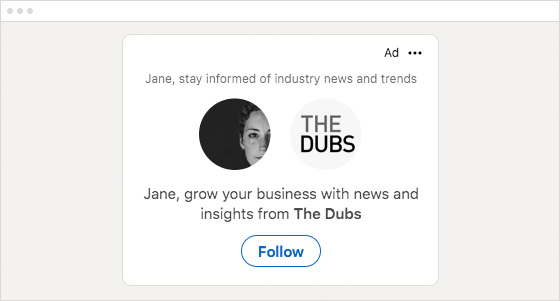 These ads are personalised to each member and feature the member’s profile photo within the ad next to your business logo (or another image of your choice if you want to creatively experiment), plus their first name and your company name in the ad copy. The purpose of including the audience’s profile picture within the ad itself is to create an eye-catching creative which LinkedIn claims has a 200% better click-through-rate (CTR) than ads without a personalised element.

The other way to run a follower campaign on LinkedIn is to create an engagement ad that is a piece of sponsored content like below.

These ads will have a more subtle call-to-action to follow (the plus symbol and text link in the top right corner) than the explicit Follower ads but have the advantage of allowing a piece of content to do the heavy lifting in encouraging someone to follow your brand. Offering an incentive to follow through useful, quality content, this approach also has the added benefit of driving traffic to a content hub, allowing customers to continue their journey. An engagement ad that is a piece of sponsored content is also a more cost-effective way to include a follower component into a campaign with minimum bids on sponsored content ads being significantly less in most cases than the direct ‘Follower ad’ format. Through always-on content and communications finance brands can nurture customers and support them over time to take meaningful action.

To run a follower campaign on Twitter is a simple process. In the Twitter ads manager, you can choose ‘Followers’ as an objective for an ad campaign, select a bidding budget, select a target audience as usual and then choose a tweet to run as the Follower ad. Twitter recommends using a text-only tweet for follower campaigns like the one below.

Twitter ‘Follower ad’ impressions importantly will also appear in the highly visible and influential ‘Who to Follow’ box as seen below. 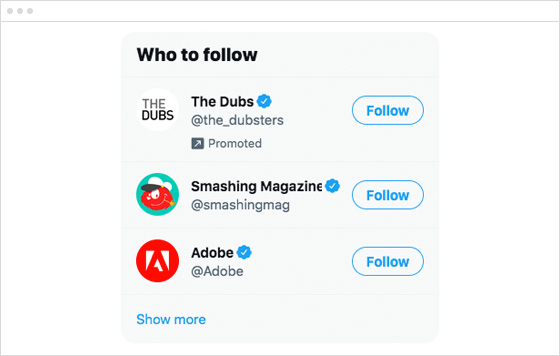 Building a social media audience across key social channels is a critical part of any distribution strategy, allowing you to build a connection with your audience over time. Even if it’s only a small percentage of a monthly distribution budget, financial marketers should consistently allocate marketing budget to always-on ‘follower’ campaigns. 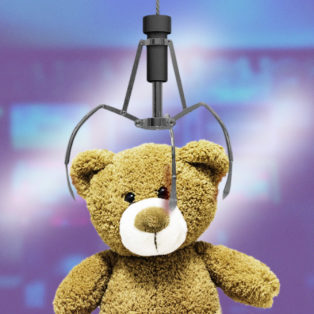 Why an always-on content program needs no off switch 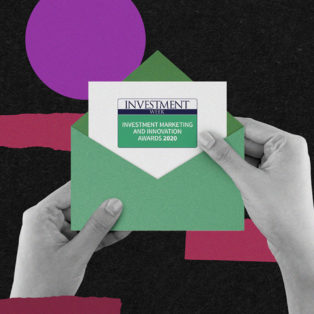 Social media
Social media marketing trends for asset managers
NEWSLETTER
Get on the list
Subscribe to receive the latest content marketing news and insights straight to your inbox.