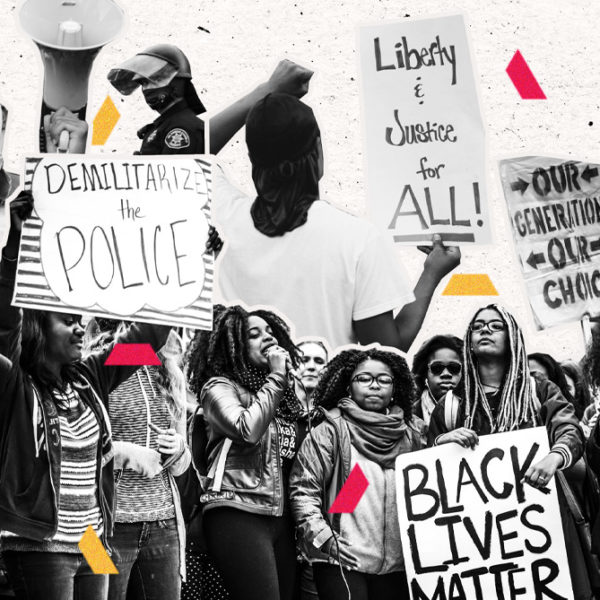 Is staying silent on race issues an option for finance brands?

In the past, Financial Marketer has looked at whether finance brands should take a stance on sustainability issues. With global protests exploding into the news and translating into heated protests and debates across the globe, what position should a finance brand take on this crisis, if any?

Hundreds of thousands of protestors around the world have marched since unarmed Minneapolis man George Floyd was killed by a police officer. Millions more have blacked out their social media display pictures while some of the biggest social media platforms have showed solidarity with #BlackLivesMatter by changing their logos and images to black.

Facebook pledged US$10 million to “ending racial injustice”. Netflix posted on Twitter saying, “To be silent is to be complicit.” The CEOs of Amazon and Google have published official statements supporting the Black Lives Matter movement.

Where are financial brands sitting with this?

Despite the risks of aligning with a political movement, many financial institutions have also taken a stand.

On 2 June 2020 Tom Naratil, Co-President Global Wealth Management and President Americas at UBS used LinkedIn Pulse to publish a piece he sent to all UBS employees. In it he quotes Martin Luther King Jr and tells us that silence is not an option. “Please continue to take care of yourselves and each other, and reach out to offer help and a voice to those who need it,” Naratil says. 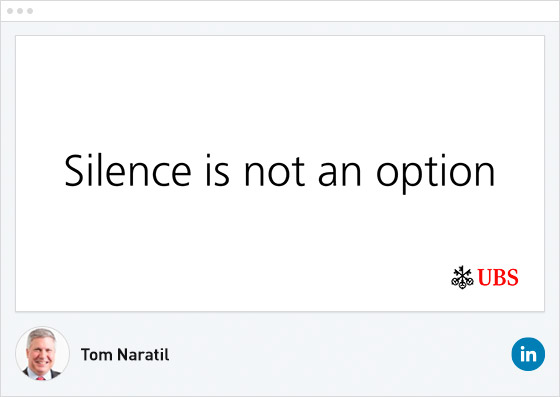 Citi CFO Mark Mason wrote a blog titled ‘I can’t breathe’ which was shared on citi’s Linkedin page and railed against the lack of “fundamental human and civil rights and the dignity and respect that come with them”. 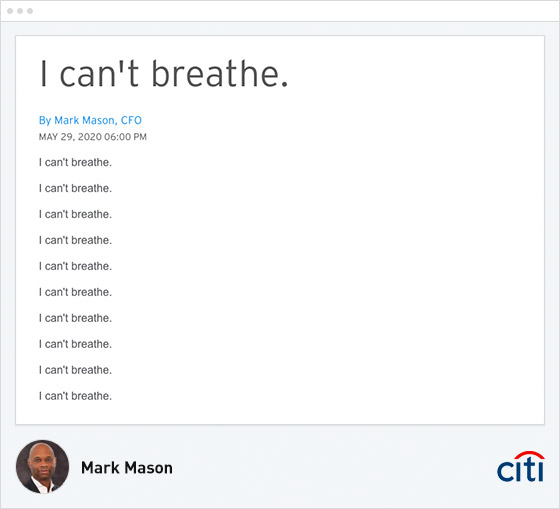 Bank of America went a step further and announced “a $1 billion / 4-year commitment to support economic opportunity initiatives to combat racial inequality accelerated by the global pandemic”. CEO Brian Moynihan emphasised: “We all need to do more.”

As evidence of how carefully the matter of racial inequality is being handled, these brands have so far only made this one C-suite statement each on Linkedin since Floyd’s death, no doubt carefully vetted through layers of brand guardianship. There is no margin for error in this space, or for ill-advised commentary.

There is no margin for error in this space, or for ill-advised commentary.

As Tom Naratil said, being silent is no longer an option. In Australia a national survey conducted by the Committee for Economic Development of Australia (CEDA) showed that more than 75% of respondents supported business leaders speaking out on issues of national importance, including social and environmental issues. And when it comes to taking action, a Morning Consult poll of US adults shows how consumers rank the actions brands are taking in the wake of the mass protests following George Floyd’s death. 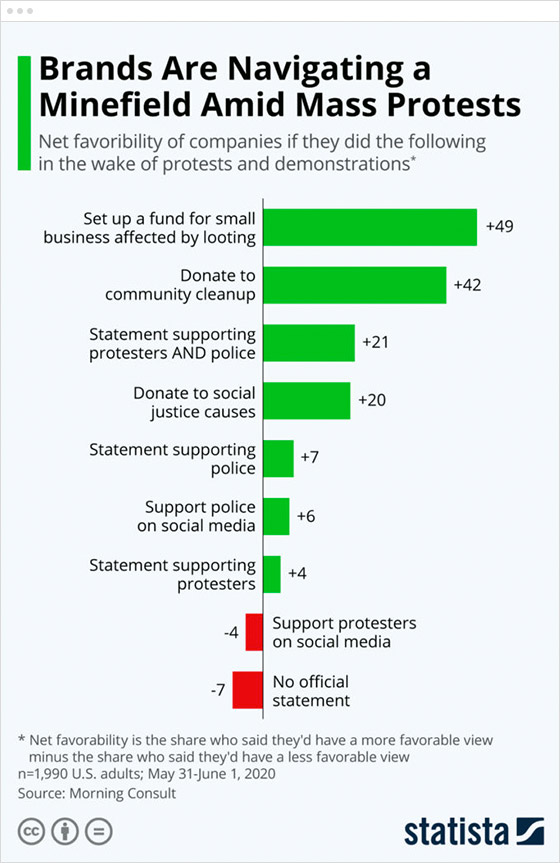 The 2018 Harvard Business Review (HBR) article, ‘When CEOs Should Speak Up on Polarizing Issues’, describes the difficulties leaders face when deciding whether to weigh in on sensitive social and political issues. “Although every conceivable action carries considerable risk, inaction may not be much of an option,” says the article’s author Alison Taylor.

But is publishing an official statement and/or changing your social media picture to black enough? What kinds of statements should be made, and by whom? Is action also necessary?

Since George Floyd’s death, figures in the music and entertainment industries have posted black squares and some even stopped commercial activity in solidarity – yet there has still been negative commentary, with critics describing the music industry’s efforts as “white guilt” and the posting of black squares as reductive.

When actor and activist Emma Watson posted on Instagram on Blackout Tuesday, her detractors said she’d acted too late, and that she didn’t include links to guide users on where they can learn more about the cause or donate to it.

After YouTube said it would spend $1 million on social justice initiatives, critics pounced, saying its moderation efforts against racist content had historically been weak. TikTok was accused of suppressing black creators through its algorithm after it made its own Blackout Tuesday statement.

L’Oreal copped flak for posting a black square with white type that says: “Speaking out is worth it”, talking of its solidarity with the black community and its commitment to the @naacp (the National Association for the Advancement of Colored People). A former L’Oreal ambassador, trans-model Munroe Bergdorf who had been sacked because her views were “at odds” with their values, called L’Oreal “racist snakes” and the story quickly got traction online.

The utmost importance of authenticity

One thing you can be sure of: if you use an important civil rights cause in a calculated move to sell your products, it will not be well received. Authenticity is what is needed here.

Decisions should be based on corporate principles and employee values, rather than trying to figure out where public sentiment lies, as Alison Taylor’s HBR article explains. Companies need to not just consider the business case and the opportunity to take direct action, but also their values, determined not just by customers but also employees, business partners and civil society organisations.

And when business interests and values conflict, values are the dominant variable, the article says. Often today, employee demands in particular will override other strategic interests.

When business interests and values conflict, values are the dominant variable.

Ice cream maker Ben & Jerry’s have communicated their values of social, economic and environmental justice and equality for decades, and adhered to them, from how they source their ingredients to racial justice activities. When they published a blog titled ‘Silence is NOT an Option’ detailing a four-step plan towards anti-racism in the US, using a graphic that read “Dismantle White Supremacy”, they received more support than backlash: their statement was viewed as genuine.

So while there is obviously a long-term economic gain in aligning with the values of your customers and the wider community by making a statement, that may only serve you if you live those values.

Back statements with action

Where possible, corporate statements should be supported with positive action. More than just speaking out, Citi’s Mark Mason says: “my wife and I have decided to make donations to three organisations fighting injustice and inequality – NAACP Legal Defense and Educational Fund, Advancement Project, and Color of Change.”

Bank of America’s commitment to “a $1 billion / 4-year commitment to support economic opportunity initiatives” put its money firmly where its mouth is.

This is a serious, emotionally-charged topic. Any finance brand – any brand – that steps into this territory better know what they genuinely stand for – and be prepared to support it with action.

In an industry bound by tight regulations and complex subject matter, we specialise in creating content for finance brands. 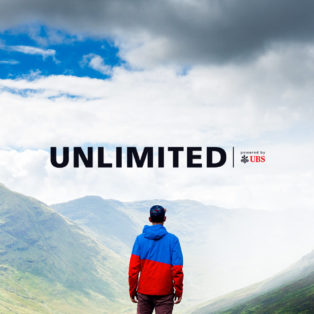 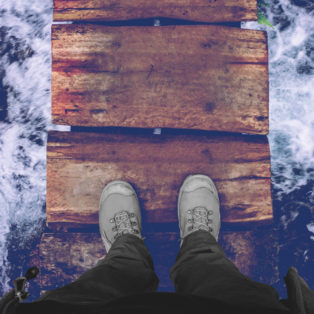 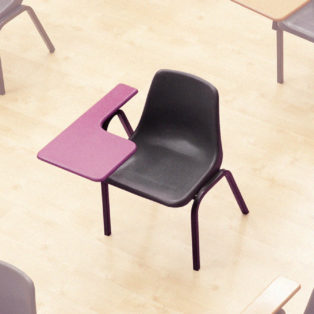 Strategy
Should your finance brand move into the metaverse?

Content production
How to address consumers’ digital and social needs

Financial industry contributor
Building bridges over troubled waters
NEWSLETTER
Get on the list
Subscribe to receive the latest content marketing news and insights straight to your inbox.