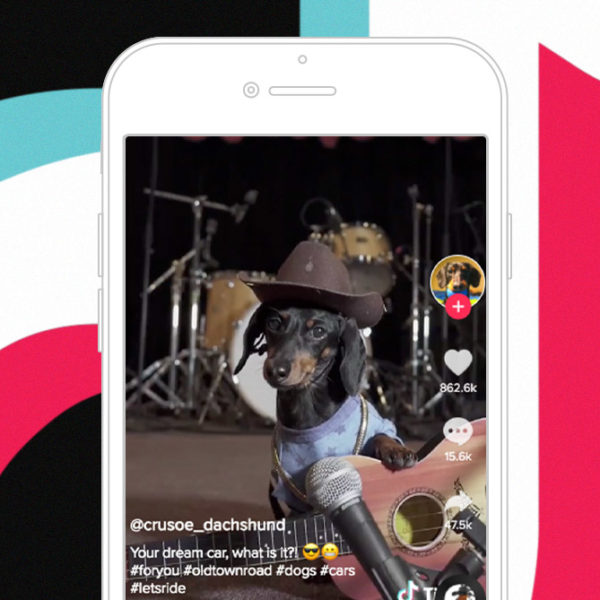 Is TikTok the right fit for finance brands?

It doesn’t sound revolutionary – users creating and sharing short videos overlaid with music and effects. But TikTok user stats show overwhelmingly that it’s the fastest growing social media platform of our day. We look at the app’s evolution to see how it might dance and lip-synch its way into a finance brand’s strategy.

A long time ago in internet terms (2014) a phone app called Musical.ly was born, quickly capturing the imagination of American teens. Fans shared short videos of themselves singing, dancing and lip-synching to music or comedy. By 2017, Musical.ly had more than 200 million users (or “musers”) with stars like Shawn Mendes, Kim Kardashian and Selena Gomez interacting with fans on the platform.

By late 2018 TikTok was the most downloaded social media app in the US. As of December 2019, 8.7% of the UK’s smartphone population was using TikTok. In Australia and New Zealand there are estimated to be 1.4 million monthly users. With more than 1.5 billion downloads of the app so far across 150 countries and in 75 languages, it is streaking ahead of both Twitter and Snapchat globally.

With more than 1.5 billion downloads of the app so far across 150 countries and in 75 languages, it is streaking ahead of both Twitter and Snapchat globally.

Some of the biggest TikTok influencers/stars are 17-year-old singer Loren Grey with almost 40 million fans, followed by Baby Ariel (Ariel Martin) and Riyaz Afreen, both with around 30 million fans.

What makes TikTok different from other platforms?

It feels different from Facebook or Instagram, with its focus on lists of recommended videos based on your previous interactions. There are lots of in-jokes and memes and a big emphasis on trending filters and hashtags. A lot of the platform is based in music; users are encouraged to engage with other users through “duets”.

The output is often quite rough. TikTok wants it to be seen as a platform for self-expression, not necessarily for polished videos.

Overall, TikTok has a reputation for being a pleasant, harmless, fun place for memes and challenges; yet, because there are so many cringeworthy videos being published, there’s an inevitable humiliation factor at play. On YouTube and Twitter many people celebrate and denigrate the best and worst of TikTok.

The upshot for finance brands

In early 2019 TikTok was fined $5.7 and ordered to delete data, after knowingly hosting content published by underage users and being reported by outraged parents. Like Vine, Instagram and Snapchat before it, TikTok has its perils for brands – mainly privacy issues and the prevalence of online bullies and creeps.

TikTok is also in its relative infancy as a commercial platform, still figuring out things like rate cards and verifying its user numbers. At this stage, the opportunity is similar to Instagram – partnering with established and emerging TikTok influencers using direct brand take-overs, branded lenses and hashtag challenges, accompanied by a $10K minimum spend.

Brands who have enjoyed success on other platforms are testing the water with TikTok, like UK fitness clothing brand Gymshark. They partnered with six TikTok fitness and lifestyle influencers in a “66 Day | Change Your Life” challenge. Users uploaded a photo of themselves on day one, and then again 66 days later, for a chance to win Gymshark goods.

Between them, the six influencers had almost 20 million fans. A lot of their posts in the campaign were choreographed fitness moves set to music, as well as dance, acrobatics and lip-synching wearing Gymshark clothing. The campaign gained almost 2 million hearts (Likes), 12.5K comments and an engagement rate of 11.11%

In the US, brands like Chipotle, Kool-Aid, and Walmart have harnessed influencers and celebrities for fun TikTok competitions and challenges.

In Australia, the AFL has created a program of TikTok content consisting of “talent led challenges, humour, outtakes and content that responds to themes that are trending specifically on the platform.” One video had player Will Powell singing TLC’s Waterfalls, gaining him more than 400,000 views and 54,000 Likes.

Fashion, food, sport, make-up, travel, music – these are all screamingly relevant to TikTok users. Could a tier-1 retail finance brand looking to reach Gen Z sit comfortably on TikTok? That depends. TikTok is a platform for distinctive subcultures, for real people expressing themselves and joining in challenges linked by hashtags to create authentic, in-the-moment content.

Are you equipped to push out videos quickly to keep up with trends, and do you understand the TikTok environment and its in-jokes? Are you prepared to be funny, quirky and entertaining – and use real people? Will you be happy to create awareness through engagement and connection, rather than try to hard sell? And are you comfortable not being serious?

If the right finance brand could allow itself to relax into the TikTok world and find the right influencers or talent to align with their brand voice, then TikTok marketing could be extremely powerful. Digital banks, digital insurers and neo banks who use a light tone and a simple model – they’re probably best positioned to take advantage. Over-produced, safe videos will likely miss the mark. It will be interesting to see who takes up the TikTok challenge.

If you’re up for the challenge but are daunted by the prospect of shifting the tone of your brand’s content, we can help you to push your brand’s boundaries. Get in touch.

Strategy
What performs best for asset managers on social media
NEWSLETTER
Get on the list
Subscribe to receive the latest content marketing news and insights straight to your inbox.