In our latest research report, we put the social media activity of Australia’s biggest asset managers under the microscope.

Australian Asset managers as a whole aren’t very active on social media, with only two of the top 10 in the report maintaining all four of the big social channels (Facebook, Twitter, YouTube, and LinkedIn). This is understandable in that their audience is a targeted demographic of investors but compared to their European and American counterparts, Australian Asset Managers might be missing out by not being more present on social channels.

Perpetual is the most social media-savvy of the asset management funds analysed, and is engaged across all channels, actively posting to all except Facebook. The company posts on LinkedIn up to three times per week, using videos of internal subject matter experts discussing investment issues. LinkedIn content also links to Perpetual’s Insight content hub. Perpetual tweets on average twice a day, and retweeted 37 times in three months, which shows they are monitoring Twitter. The company is not highly active on YouTube but still more active than its competitors, posting four times in the three months, and clocking up a total of 903 views (the most posted and most views for any of the asset managers in this group). 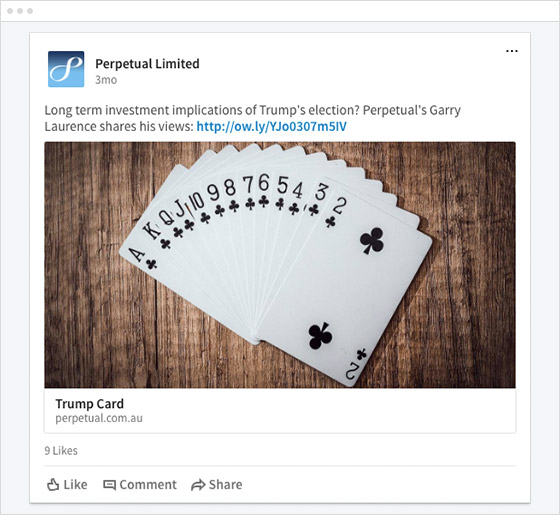 AMP Capital are using LinkedIn and Twitter quite actively but not Facebook (even though they have 1784 followers), or YouTube. AMP has its own Youtube channel but AMP Capital doesn’t. On LinkedIn, 75% of posts are links to content articles by AMP Capital’s Chief Economist Dr Shane Oliver such as: The Eurozone – will they or won’t they break up? And what are the implications for investors? Twitter posting uses best practice around images, @mentions, video tweets, and hashtags and retweets, of which there were 16 in three months.

Compared to their European and American counterparts, Australian Asset Managers might be missing out by not being more present on social channels

Like most of the brands analysed in the report, Platinum Asset Management predominantly relies on LinkedIn and Twitter, is not active on Facebook, and posted only once on YouTube. LinkedIn features links to Views and Insights articles on the Platinum website such as The Ultimate Test of Human Intelligence. Twitter seems to be used to communicate with advisors and promote events, as well as links to Views and Insights. The company also retweeted media mentions of Platinum. 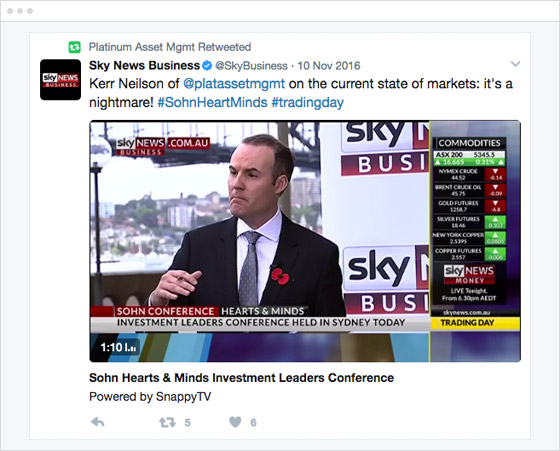 CFSGAM have a low level of social activity with just one tweet and five LinkedIn posts. They are not active on Facebook or YouTube. On LinkedIn, posting often links back to Insight articles on CFSGAM’s content hub. 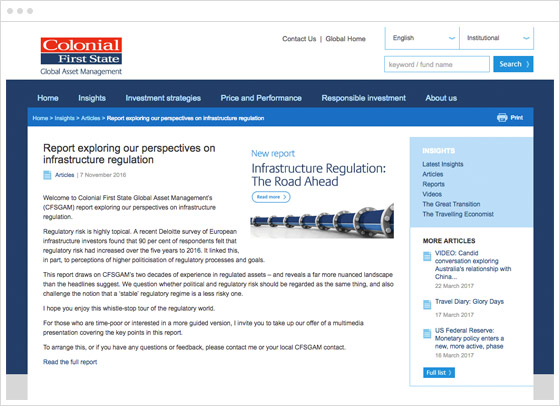 Pinnacle also have quite a low level of social activity, with five LinkedIn posts and one YouTube post. There was no Facebook or YouTube activity during the quarter examined, while Pinnacle’s LinkedIn page mostly features job postings, corporate affairs and links to Pinnacle executives talking in the press. 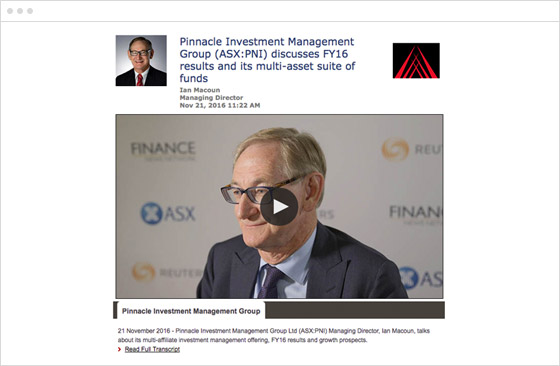 Magellan only posted two YouTube videos during the three-month period.

Challenger has profiles across the four main social channels but there was zero activity on all channels.

Zero activity on all channels but the company does have a LinkedIn profile.