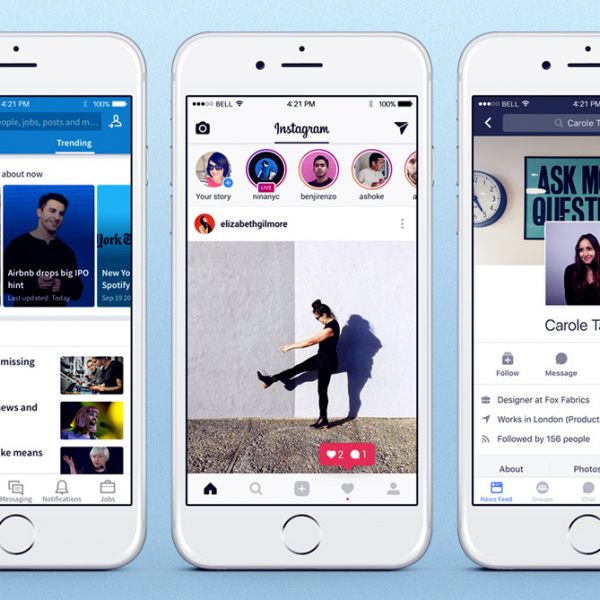 //
We name the real winners
By Darren Thackeray, contributor. 12 December, 2017

We need competition. It drives change and pushes brands to experiment and deliver bigger and better services. Given how significant a presence social media has in our everyday lives, it’s little wonder that the big social players are pushing into each other's territory to win more users.

The importance (and potential pitfalls) of competition

Social media brands are diversifying. Why not? They have the clout and wealth to broaden their services and they get stronger with each new user. Social media platforms used to operate within their own niche - Snapchat owned the ‘disposable’ video, Instagram perfected photos, Facebook was for family and friends and Twitter was for public broadcasting. Each platform had a use and we used a combination of them in our day-to-day lives, but all that’s changing. The social giants are learning from each other’s mistakes and constantly evolving to be the one stop shop we all need.

LinkedIn have launched a new video service encouraging you to ‘show your experience’, as they look to stay socially relevant in 2017. Meanwhile, Facebook have been working hard on Workplace, a business organisation tool that echoes the likes of Slack and Yammer and feels like a direct threat to LinkedIn (who’d have thought Facebook would make its way into people’s office lives?).

Facebook is also investing heavily in the video scene, taking a leaf out Netflix’s book by producing original video content.

Is this really driving useful change, or are they just chasing each other’s tails and stepping on one another’s toes? Let’s attempt to find out by going through a few of the most prominent arrivals in 2017.

The social giants are learning from each other’s mistakes and constantly evolving to be the one stop shop we all need.

When LinkedIn first launched, it primarily served as an online CV and a way for individuals to connect with potential employers. Fast forward to 2017 and LinkedIn is working to position themselves as the platform of choice for brands to engage with professionals. The evolution of this role has seen them add numerous strings to their bow including video ads and ‘trending storylines’.

According to a LinkedIn blog post, Storylines are “daily curated interest-based feeds about the most important developing stories in your industry.”

Effectively, LinkedIn wants to become your go-to source for relevant tech, business and industry-specific news, and it seems to be working. While LinkedIn has boasted over 500 million strong user-base in the past, those users were only accessing the site occasionally to check for jobs or update their profile. Today, LinkedIn reports that 40% of users access the site daily. That’s big news for LinkedIn, and good news for its users.

Trending storylines mean your content is likely to reach bigger (and crucially, more relevant) audiences in the same way Tweets and Facebook posts do. What was once a relatively static platform now seems to be more content rich and dynamic, and an obvious destination for finance brands to share industry relevant product information with consumers.

Instagram Stories is familiar territory for many. Rolled out in August 2016, it boasts 150 million users every day. Stories allows people to seamlessly create a visual blogroll of their day, instead of being limited to just a few pictures at the top of their profile.

This in itself holds no tangible benefit for brands. However, in 2017 Instagram also launched ‘insights’ for Stories so that brands can access metrics about their posts, including reach, impressions, replies etc. They then announced full screen ads for Stories. The two combined can provide a powerful advertising tool for finance brands looking to break through the noise with some relevant, targeted advertising.

Chatter, Yammer, Confluence, and Slack are huge players when it comes to business organisation and communication, and now Facebook have thrown their hat into the ring. There’s no doubt they’re trading on the Facebook name here, but it seems they’ve gone to extra lengths to ensure that your Facebook account and Workplace account are markedly separate – a great move considering many people actively try and keep their work and personal lies separate from Facebook. This seems to be a concerted effort on Facebook’s part to develop a ‘presence’ in the workplace and could be a sign that they’re looking to take on LinkedIn in the not too distant future? Before we know it, users could be applying for jobs, loan applications and more via Facebook in the same way as WeChat has become an all-encompassing platform in China.

As part of this push, they’re also championing original video content. Could we see a future where Facebook is pure video, hooking viewers on its content much like Netflix does? Either way, it’s a new and exciting avenue for brands to try, and one that should help them reach their audience with greater ease.

What do these innovations mean for finance brands?

Finance brands have a real challenge on their hands in today’s market. Millennials and younger age groups see banking differently, and many of the traditional associations with banks, home ownership and pension management are almost irrelevant. Banks need to reinvent the way they communicate with younger audiences, and the more the social media giants diversify, the greater the opportunities to bridge that gap and connect with audiences on multiple platforms.

It may look like Facebook, Instagram, LinkedIn et al are treading on each other’s toes, but it’s a safe bet that brands and consumers will come out on top, with more streamlined services and better opportunities to advertise effectively.