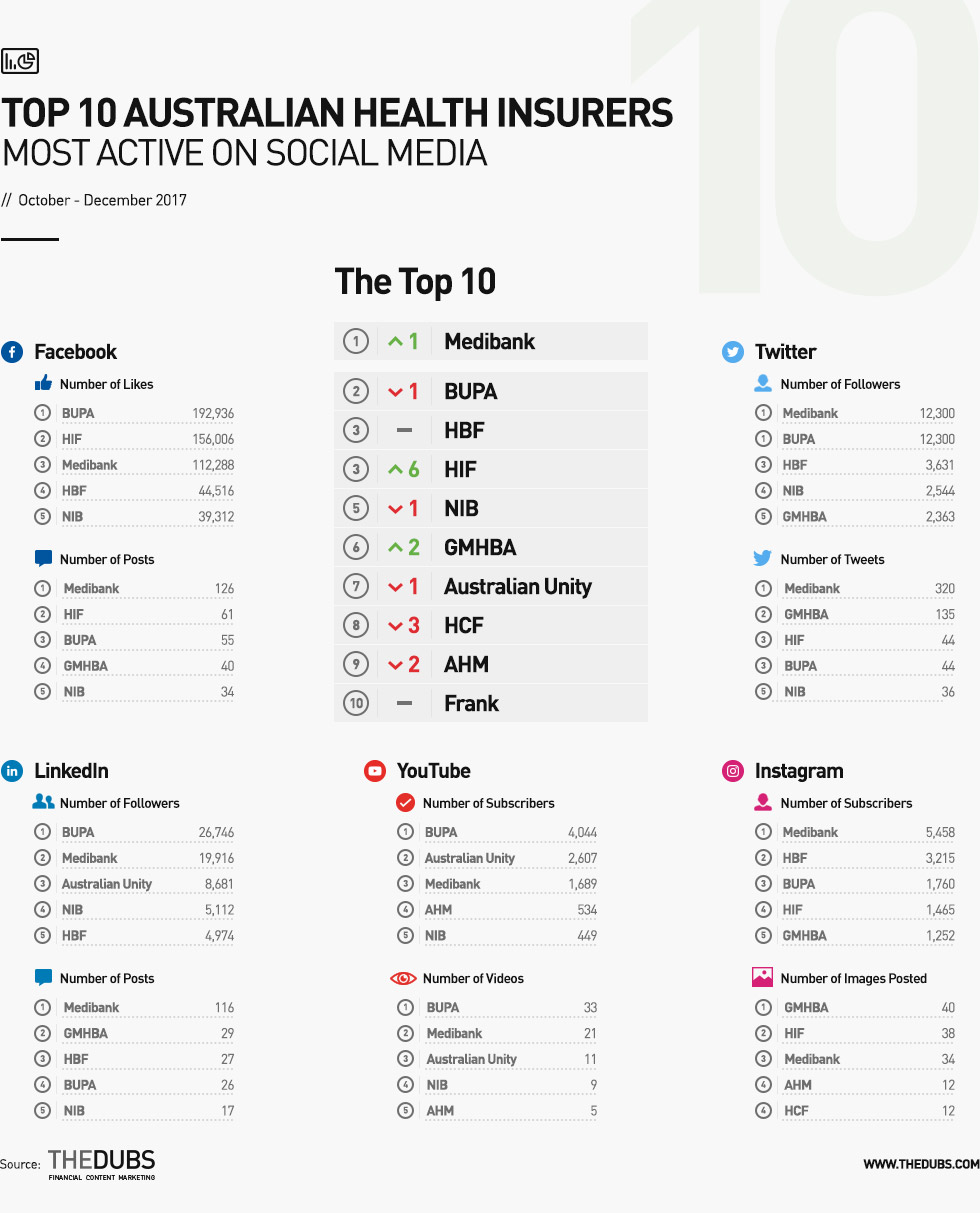 One year ago we delved into the social media activity of Australia’s health insurers, ranking them based on their overall presence and the level of engagement they’ve achieved with their target audience. In this report, we look at what’s changed in the past year and who has taken the lead.

While Medibank ranked 1st in many of last year’s reach and engagement metrics, showing strength on Twitter in particular, overall, Bupa came out on top. This year, Medibank has claimed the coveted top spot, however, both brands ranked as top performers across all social channels, going head-to-head for 1st and 2nd position in most instances.

Apart from HIF doubling their volume of posts, rankings for reach and engagement mirrored those from last year. Acknowledging that Facebook continues to be the social channel with the best reach, all of the health insurers were able to successfully increase their following, with the median Facebook following increasing by 25% over the course of the year. To extend their use of Facebook even further, Australian health insurers should look at how Facebook Messenger could fit within their brand strategy.

Twitter may have clocked the most activity, but with 4 of the 10 brands recording minimal to no activity, the results have clearly been skewed by Medibank and GMHBA’s high level of activity. Only Medibank and GMHBA posted an average of more than one Tweet per day, in fact they posted more than 3 times per day, and Medibank’s posts doubled that of 2nd placed GMHBA. Even with this high level of activity, only 2 of the health insurers had followings greater than 10,000, which for brands this size is quite small. Adding to this the fact that none of the brand’s following have increased in the past year, all signs are pointing to the fact that Australian health insurers need to rethink their use of or approach on Twitter. Twitter’s manager for financial brands shares content tips that all brands can learn from.

Even with this high level of Twitter activity, only 2 of the health insurers had followings greater than 10,000, which for brands this size is quite small.

For a collection of brands this size you would expect a far larger following than 10,000, which only Bupa and Medibank hold. Health insurance is relevant to all Australians and is generally of more interest to higher income earners, making a professional network like LinkedIn a well-suited channel of communication. Clearly yet to cotton on to this opportunity, the reach of all health insurers remained the same as our previous report. Australia’s health insurers should review their strategy on LinkedIn and consider some of these sponsored content tips direct from LinkedIn’s marketing team.

Again, given the size of each of these brands, their activity on YouTube is pretty insignificant, with only 3 brands having more than 10,000 followers. Given the rising popularity of video, this is a channel worth exploring. Australian Unity had the second largest following and was the 4th most active health insurer, which is interesting given that they generally target an older audience. Given that Australian Unity didn’t have strong activity across any other social channel, this is a good reminder that brands shouldn’t ignore older audiences on social media. Check out Google’s banking industry manager’s tips on mastering YouTube content.

Last year the activity of Australia’s health insurers on Instagram didn’t warrant mentioning, but a year on, all but t3 health insurers have ramped up their activity. While Bupa usually holds one of the top spots for reach or engagement, they haven’t posted on Instagram since 2015, which is a real disservice to the brand and their following. Not the only industry to have realised the growing value of Instagram, we explored the rising popularity of the platform and how brands can take advantage of it.

Research is what we do

Research is at the core of everything we do at The Dubs – from strategy, through to content creation, distribution, social sharing and our own digital processes.

As well as keeping us at the forefront of our own industry, we conduct research on the industries in which our clients operate – asset management, general insurance, health insurance, super funds, retail banking, life insurance, and more.

If you are interested in a custom report that benchmarks your organisation against your competitors, contact us to find out more.