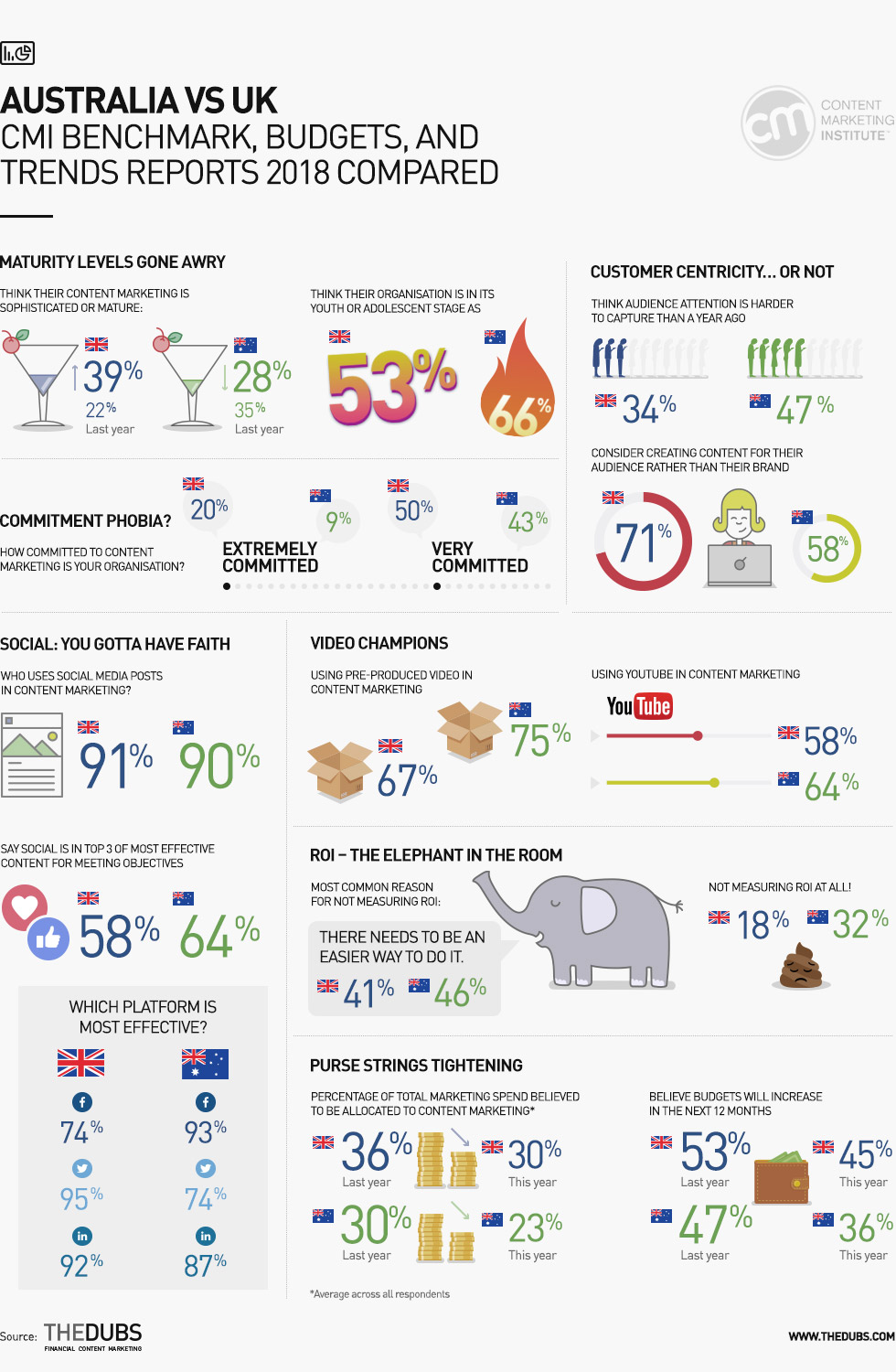 UK vs Australia: how we compare in content marketing

Every year the Content Marketing Institute releases a series of regional reports tracking benchmarks, budgets and trends in content marketing. We’ve laid the 2018 UK and Australian reports side by side to see who’s had the better innings, and where the discrepancies are.

Somehow things got less grown-up during 2017, and Australians are feeling more challenged by integration and scaling issues across their organisations, and not feeling they’re providing accurate measurement. Success is close, but no cigar.

Half of UK respondents described their organisation’s attitude to content marketing as “extremely” or “very” committed; In Australia it was less so, at 43%.

When you drill down, only 9% of Australian respondents believed their organisations to be “extremely” committed compared to 20% in the UK.

Australian audiences harder to attract; maybe because marketers are too brand centric?

Almost half (47%) of Australian marketers said it’s become more difficult to capture audience attention over the past year, compared to 34% in the UK.

At the same time, only 58% of Australian content marketers think they’re considering their audience when they create content (as opposed to their brand), compared to 71% in the UK.

Only 58% of Australian content marketers think they’re considering their audience when they create content, compared to 71% in the UK.

That’s one of the sacred tenets of content marketing right there, being overlooked in more than 40 percent of Australian organisations…

The UK needs to get their video on

Given the “staggering” stats about video consumption worldwide, the UK might want to get a wriggle on.

Around 90% of both UK and Australian respondents use social media posts in their marketing strategies.

But when asked which were their top 3 most effective types of content for achieving objectives, 56% of Australians said social media compared to only 44% of UK marketers.

In Australia, Facebook is the most popular platform for marketing (used by 93% of respondents), which matches latest Sensis statistics on Facebook use in Australia (94% across the board).

Yes, despite all the tweeting and Facebooking, LinkedIn is believed to be the most effective social media platform in both regions!

Measuring ROI is too hard

What was the most common reason for not measuring ROI in the UK and Australia? Simple: there needs to be an easier way to do do it!

And alarmingly, in Australia almost a third (32%) said they don’t know how to measure return on investment – AT ALL (compared to the UK’s 18%).

Australians not so optimistic about budgets

On average, across all UK respondents, people thought 30% of all marketing money was being spent on content, down from 36% last year. In Australia, while they believed it was 30% last year, this year it was only thought to be 23% as an average across respondents.

And only 36% of Australians think budgets will increase next year. Compare that to last year, when 47% of Australians believed they would increase. (Which they didn’t, apparently.)

In the UK, 45% of respondents think it will increase next year.

Not a competition, but a learning exercise that shows there’s room for improvement on both sides.