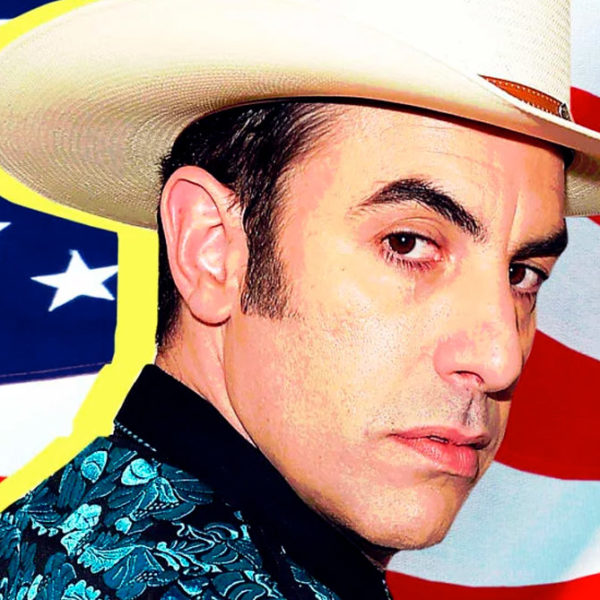 //
This is not fake news

What can a master satirist like Sacha Baron Cohen teach us about content? Being fearless for starters, but also being attentive to every creative detail. No word of a lie, Sacha Baron Cohen’s latest series Who is America? is a strong content example that finance brands should consider following.

In July 2018, Sacha Baron Cohen launched his new seven-part series, Who is America?. In it, he’s unrecognisable as a range of outrageous characters, interviewing American politicians, gun advocates and more – none of whom have any idea they’re being pranked. Like Da Ali G Show and Borat, it’s cringey viewing that repeatedly strays into the ridiculous, leaving most involved looking bewildered.

Supporting the series is the ‘Truthbrary’ website (the opposite of ‘Liebrary’) – a collection of “studies and investigations” published by one of the show’s characters, Dr Billy Wayne Ruddick. (That’s the conceit anyway.) He does this “for the good of the American people”, calling on readers to reject mainstream media and FAKE NEWS.

What you might not realise on first reading is that the studies and investigations – better described as conspiracy theories and made up of hilariously badly-spelled, illogical and at times, demented arguments – are poached off the web. As Wired reported, they’ve all been written by real conspiracy theorists, fake-scientists, right-wingers etc.

Does this digital entity sound like something you’d never, ever go near with a 50-foot barge pole? Well, never say never. Here are four takeaways from Truthbrary that we swear any marketer – even a financial marketer, could use to their advantage. (Fortunately, none of them require you to dress in character or take your pants down.)

Financial brand websites have a personality crisis, meaning most just don’t have one. Blandness is rife. Every site looks and reads just like every other site.

The Truthbury has its own idiosyncratic, chaotic layout, its own typeface/s, its own kooky flavour, complete with spelling and grammar atrocities, over-capitalisation and too much underlining.

Granted it’s not a look that most corporates would adopt, but hey – what IS the look your brand has adopted? Could you describe it? Would anyone remember it? Would anyone actively enjoy it?

While you’re pondering that, remember that Apple and Google have memorable, distinct personalities, and they’re not afraid to use them.

And guess what? People still trust them, even though they make a bold statement with their brand. And one day, people will probably be banking with them.

The Who is America? website could have just been a series of clips from the show, a description of what to expect from the episodes, some images, where to watch etc. A bit like the website that Showtime built for it.

But Baron Cohen and his team are creatives. So they saw an opportunity to extend the joke. They had an idea: that one of the show’s characters could have his own website that would perpetuate the notions that the show is trying to explore, but not do it in any obvious way.

They even have the character of Ruddick criticising Baron Cohen on the site, i.e., the whole thing stays in character.

What’s to stop a finance brand making an idea the hero, rather than a product or a service? The idea can help sell your product or service, just in a more creative and entertaining way.

What’s to stop a finance brand making an idea the hero, rather than a product or a service?

We all know that feeding the beast – coming up with regular content to fill your calendar, is one of the biggest challenges for marketers.

Apart from the manifesto of the site, and a few paras here and there, The Truthbrary creators didn’t bother writing much of anything new, they just poached outrageous articles that were already in circulation. As Wired points out, that’s probably not a sound approach. We certainly wouldn’t recommend it.

BUT curated content can be a legitimate content stream – if you give the right credit to the content’s author, and put it in context for your readers, pointing out what your target audience can take from it. (If your business is particularly risk-averse, you might get the author’s permission to quote it.)

If somebody else has said it better than you ever could, then their piece deserves more attention, and your readers will enjoy having its relevance to their needs clearly explained.

4. Use social media in a masterful way

To help flesh out his four characters’ profiles, Baron Cohen’s team set up parody Twitter accounts and as you’d expect, it’s not your usual, obvious promotional push. On the Billy Wayne Ruddick Jr PhD Twitter page, he actively discourages you from watching Who is America? by tweeting “DO NOT WATCH it”. Which of course makes you want to watch it.

It’s the kind of risky, creative follow-through that so rarely happens in financial marketing. But it’s so much fun and it’s so inspired.

“So moved to see the world come together for #WorldOtterDay. When Malala and I adopted Lenin and Marx from our local sanctuary, we knew we could provide a wholesome life for these intelligent gender-neutral mammals.”

Outrageous, we know – but a finance brand creating content with a personality you can’t ignore, isn’t that absurd.

In fact, content lessons often come from the unlikeliest of places, be it Ed Sheeran or the imaginary characters in Deadpool 2.

Strategy
Cashing in on end of financial year content

Strategy
How to Tell a Cracking Yarn
NEWSLETTER
Get on the list
Subscribe to receive the latest content marketing news and insights straight to your inbox.